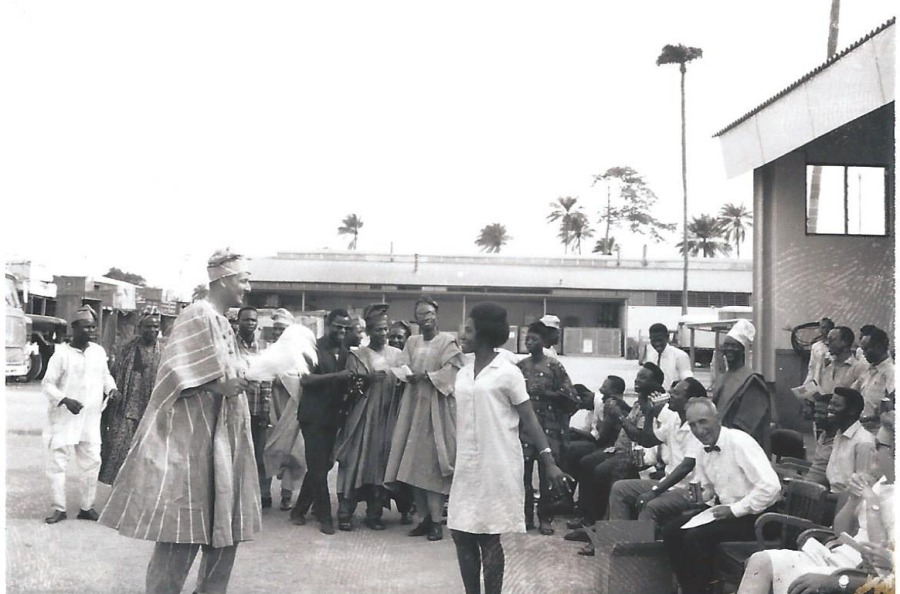 My late father (on the left in cultural garb) -- a career foreign service officer -- mingling with locals at a party in Nigeria during his first post in the 1960s.

I have both a professional and personal interest in the Ebola crisis. As someone with journalism and healthcare public relations (PR) experience – and as the daughter of a career foreign service officer who lived in Western Africa – I’ve watched as the world has cumulatively crawled toward a response.

When I was a year old, my family moved to Nigeria and lived outside Lagos. It was the 1960s and my father’s first tour with the State Department. During that time, taking an antimalarial medication was a routine part of our lives. We also lived in Nigeria when the Biafran War began. As a child, I had no way of knowing that the latter would end up being one of numerous conflicts, not including many public-health challenges, that would plague the world’s second-largest continent.

Now, decades later, I am mindful that the thousands of Ebola victims in Western Africa, and the comparably few in America, crystallize that there are times when mankind should think globally, act locally, and speak with one compassionate voice.

The Ebola information cycle has created a bizarre stew of warring officials, contradictory information, media scrutiny, the potential for both overreaction and apathy, and a lack of go-to and vetted information sources. But there is a huge opportunity for professional communicators to play a pivotal role in fighting Ebola. Things that are important to PR experts  – such as coordination between key players, cogent talking points, the value of reputations, consistency, authenticity and timeliness – can make an appreciable difference.

History haunts, but also teaches. For instance, the Bubonic plague, polio, flu viruses, SARS, and the AIDS crisis (which was so poorly handled in the beginning) resulted in the deaths of millions, but also eventually magnified the roles of identification, new medical practices and treatments, alongside ongoing communications and building mainstream awareness.

Robust public education and appropriate reactions from experts, as well as various segments of the public, can help debunk myths, lead toward better healthcare strategies, and integrate communication efforts that can yield quantifiable differences. Communicating the pathology of infectious diseases and reaching vulnerable and affected populations are crucial.

The United States’ and news media’s responses to the Ebola crisis have primarily been scattershot. I recall seeing more on the cable news networks about the quarantined nurse from Maine than the altruistic doctor – with ties to Maryland and the state in which I live – who contracted the virus in Sierra Leone and died at the Nebraska Medical Center.

But I found a 60 Minutes story about the Ebola crisis enlightening. The 60 Minutes piece seemed to deviate from the formulaic, and sometimes hyped, reporting we have seen on Ebola. The commitments made by both Africans and foreigners at ground zero were obvious. However, the frontline fight at a rudimentary facility in Liberia also revealed that despite this era of philanthropy, modern medicine and access to information and better technology, we are operating in a kind of vortex.

Liberia, Sierra Leone and Guinea, all countries in which an estimated 70 percent of infected patients die, comprise the most crucial testing ground – but, more importantly, they should inspire us to comprehend Ebola beyond the fear factor.

Recently, I had the chance to interview Mary Lyn Field-Nguer, a public-health professional with an extensive background, specifically in the areas of HIV and AIDS, to glean some insight from her on the handling of public-health issues. Field-Nguer’s titles have included clinician, academician, facilitator, programmer, trainer, presenter, technical adviser, writer and manager. She has provided, for example, assistance on international and domestic health programs through the United States Agency for International Development (USAID), the Centers for Disease Control and Prevention (CDC), the United Nations (UN) and other organizations in Africa, the Caribbean, Central America, Asia and Latin America.

It’s interesting that both she and I note similar problems that center around how communication is crucial to managing public-health outbreaks such as Ebola. Field-Nuger notes the importance of engendering trust and tailoring communication to specific populations – cornerstones of effective PR.

Chronology of the Crisis

Numerous news sources have identified patient zero as a toddler in Guinea who died in December 2013. We’ve also heard about a CDC lab mishap, a possible Ebola vaccine, patients surviving after being given blood from survivors, the use of dialysis and the case of a nurse previously under watch at the National Institutes of Health (NIH); however, the takeaway is greater than these storylines. While calling for widespread conformity and protocols, some in the United States simultaneously demand an isolationist response and stigmatize the many people whose lives have been affected by Ebola.

This ensures a thorny unfurling of events.

Prioritizing public health, and open discourse about it, are essential because poor communication strategies and inadequate crisis management complicate everything. Good PR is thoughtful, responsive and unambiguous. Many things are significant, including the bureaucratic tug-of-war, points of contact with target audiences, social marketing, the role of technology, socioeconomic and cultural factors, breaking through the clutter, and the currency of transparency and credibility.

The Role of Responsive Communications

Ebola proves the value of key PR principles, including that confusion ensues when spokespeople are not on the same page or there is a void of coordination and accurately weighted information.

I believe that many players, including the CDC, initially failed in this realm, and ill-informed elected officials haven’t helped either. Nonetheless, well-tested public-health initiatives, as well as traditional communication strategies, can help in battling this virus and the misinformation surrounding it. As communicators, this is one of our “aha moments” in which we see that social media alone won’t save the day. But good crisis management can.

Global contributors – such as disparate societal influences, poverty, differences in how healthcare is provided and how information is disseminated – all affect the handling of this epidemic, but we must question whether Ebola identification, protection, triaging, treatment and fact-sharing should be better. The stakes are high because of the mounting situation in some parts of Africa, and because of the masses of people who travel and cross borders everywhere in the world everyday, so we cannot let the dissent in America over what to do dictate this country’s role.

In the Liberia 60 Minutes piece, we are able to see both the power of diligence and sad realities. These include the omnipresent smell of chlorine and bleach because people and things are constantly sprayed down, victims who are outcast and driven to quarantine in ramshackle trucks, and a child cared for by a parent who survived. Western healthcare and local professionals are wrapped and suited in protective garb that exposes nothing – unlike, paradoxically, what happened with some nurses in Texas.

While watching the story, it becomes clear that healthcare workers in Africa are ultimately protecting U.S. citizens as well, so we must be cautious about how we act on the world stage. In Africa, there are smart and resilient local healthcare workers and international volunteers, but there are also unforgiving factors, such as a lack of education, political instability and limited access to healthcare, that we must understand and help overcome.

Our country should be a much better communications leader and healthcare partner in this crisis.